Very happy to say that my poem “A Rotten Apple” is in issue #33 of Eye to the Telescope, available free here.

Voice artist Jeff Clement has performed readings of two works from the Hamthology, And both are available as free audio downloads from here! Jeff Clement can be found on Twitter @auralstimulate and his webpage http://auralstimulation.net/

The two selections are:

Both are available as free audio downloads from here.

Check it out! Support this awesome project!

Very happy to say that I have four conceptual poems in Soft Cartel!

I’d love to hear what people think of these poems.

They do have a bit of a backstory. In 2017, Grievous Angel Magazine published my short, haiku-like poem about the planet Venus:

the morning star
the evening star
yellow fog on venus

This poem became part of a larger collection of short poems, one for each planet, which was published in Abyss & Apex in January 2018 as “spatial arrangement”. In addition to all the planets, I also included the moon, Pluto, and the mysterious “Planet X”. The poem for “Planet X” was pretty short:

so short, in fact, that I was pretty sure it was the shortest poem ever written.

I was mistaken. Apparently, the shortest poem was by Aram Saroyan, and it’s known as the “four-legged m”:

When I first found out about this poem, I was annoyed. “That’s not a poem!” I thought. “It’s not even a letter! It’s visual art!”

I was mostly annoyed that I didn’t have the shortest poem and, on further thought, I realized that “four-legged m” is (should probably be considered) a poem. The word “poem” is hard to define (if I’m being honest, I really don’t know what a poem is), but a good working definition (not without its difficulties) is this: a poem is a kind of art made by creatively combining elements of language in order to generate new or unexpected meaning. The “four-legged m” works by combining typographical elements of language to create new meaning. It is a poem.

So I decided to make some more poems. All four are shorter than the “four-legged m”. One is a single character (composed of typographical elements from two other letters), one is a single punctuation mark (composed of a typographical mark and iconography), and two of them are blank (they work by placing blankness within an interpretive context). All four are available at Soft Cartel. I’d love to know what people think!

This horror poem was first published in The Literary Hatchet, issue #18, and is eligible for a 2018 Rhysling. An analysis of the poem can be found here.

My poem, ‘the concrete’, first published by Weasel Press in “Degenerates: Voices for Peace, Homelessness Edition”: 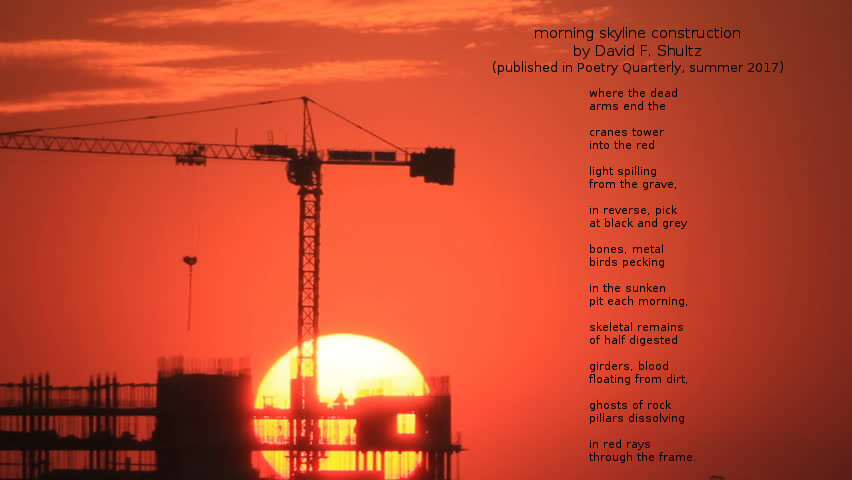 My poem ‘five sigils’ is now live on Eye to the Telescope, issue #27, the “Arthuriana” issue.

I am really happy to have this poem in this collection. The issue is free online at eyetothetelescope.org, so you should check it out!

The Rhysling awards nomination period is running from January 1 to February 15. I’ve got a few poems from the previous year that are eligible:

My favorite of these is Goodnight. My second favorite is first date.

Please consider my poems for nomination! Thanks very much!

My collection of very short poems, ‘spatial arrangement‘, was just published in Abyss & Apex, where it is available online to read for free. Each poem represents notable objects in our solar system, beginning at the sun and moving outwards through all the planets (also including the moon, Pluto, “planet x”, and beyond). Check it out if you have a minute!