The Hamthology is the greatest collection of ham sandwich literature in the history of humankind. More than fifty works of poetry, prose, and visual art on the theme of ham sandwiches come together in this anthology, spanning genres from fantasy and science fiction to mystery, horror, romance, erotica, and more. 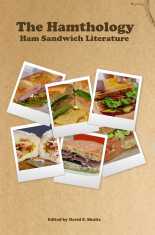 The ham sandwich has attracted little in the way of literary attention. This books fills that critical lacuna. In “Art as Technique”, the seminal work that became the basis for Russian Formalism, literary critic Viktor Shklovsky identified defamiliarization or “estrangement” as the essence of literature. Shklovsky gave the example of Tolstoy’s story “Kholstomer”, told from the point of view of a horse, which altered the reader’s perception and allowed them to see the world anew. Shklovsky argued that deforming reader expectations and de-automatizing our perceptions is at the heart of literature. Throughout The Hamthology, ham sandwiches serve as a defamiliarizing device, acting as a prism through which to view our world and the human condition. The Hamthology is more than a collection of stories, poems, and art—it is an experimental feat in writing that operates at the very core of the literary enterprise.

The stories in this collection span a wide variety of genres, from fantasy and science fiction to mystery, horror, romance, and erotica. They cover such diverse topics as sexuality and gender expression, biological warfare, space colonization, religion, parenthood, crime and punishment, and mental health. Collectively, they comprise a broad look at various aspects of human life, and they explore a wide swath of philosophical terrain through diverse literary approaches, all united by the ham sandwich. Through these works, the ham sandwich comes to represent something greater than the sum of its edible parts, transforming into a transcendent symbol—of our hopes and dreams and fears, of who we are, from where we’ve come, and to where we might go. The Hamthology is, without a doubt, the greatest collection of ham sandwich literature the world has ever known.

You can pick up The Hamthology here.